A Calgary company is modernizing trillium trailers for contemporary RVers 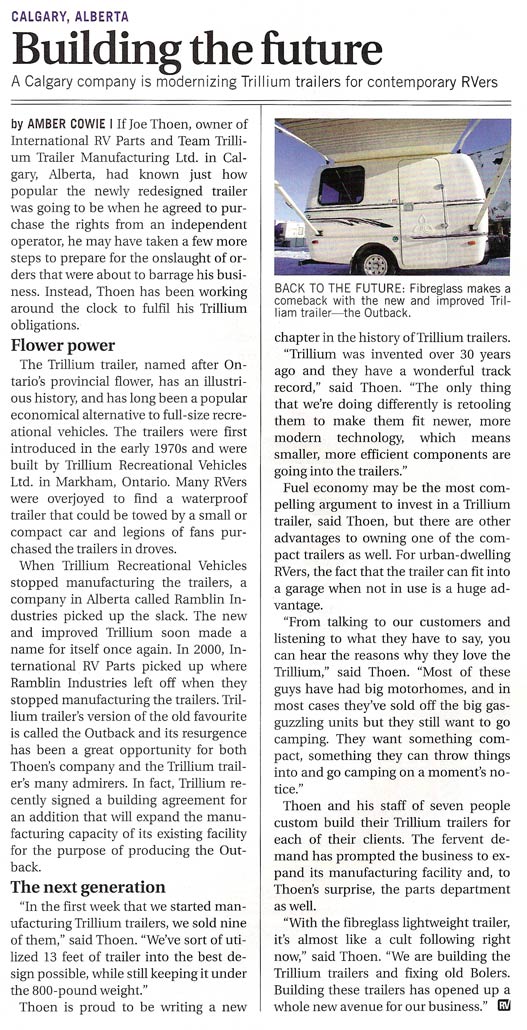 If Joe Thoen, owner of International RV Parts and Team Trillium Trailer Manufacturing Ltd. in Calgary, Alberta, had known just how popular the newly redesigned trailer was going to be when he agreed to purchase the rights from an independent operator, he may have taken a few more steps to prepare for the onslaught of orders that were about to barrage his business. Instead, Thoen has been working around the clock to fulfil his Trillium obligations.

Flower power
The Trillium trailer, name after Ontario’s provincial flower, has an illustrious history, and has long been a popular economical alternative to full-size recreational vehicles. The trailers were first introduced in the early 1970s and were built by Trillium Recreational Vehicles Ltd. in Markham, Ontario. Many RVers were overjoyed to find a waterproof trailer that could be towed by a small or compact car and legions of fans purchased the trailers in droves.

When Trillium Recreational Vehicles stopped manufacturing the trailers, a company in Alberta called Ramblin Industries left off when they stopped manufacturing the trailers. Trillium trailer’s version of the old favourite is called the Outback and its resurgence has been a great opportunity for both Thoen’s company and the Trillium trailer’s many admirers. In fact, Trillium recently signed a building agreement for an addition that will expand the manufacturing capacity of its existing facility for the purpose of producing the Outback.

The next generation
“In the first week that we started manufacturing Trillium trailers, we sold nine of them,” said Thoen. “We’ve sort of utilized 13 feet of trailer into the best design possible, while still keeping it under the 800-pound weight.”

Thoen is proud to be writing a new chapter in the history of Trillium trailers.

“Trillium was invented over 30 years ago and they have a wonderful track record,” said Thoen. “The only thing that we’re doing differently is retooling them to make them fit newer, more modern technology, which means smaller, more efficient components are going into the trailers.”

Fuel economy may be the most compelling argument to invest in a trillium trailer, said Thoen, but there are other advantages to owning one of the compact trailers as well. For urban-dwelling RVers, the fact that the trailer can fit into a garage when not in use is a huge advantage.

“From talking to our customers and listening to what they have to say, you can hear the reasons why they love the Trillium,” said Thoen. “Most of these guys have had big motorhomes, and in most cases they’ve sold off the big gas-guzzling units but they still want to go camping. They want something compact, something they can throw things into and go camping on a moment’s notice.”

Thoen and his staff of seven people custom build their Trillium trailers for each of their clients. The fervent demand has prompted the business to expand its manufacturing facility and, to Thoen’s surprise, the parts department as well.

“With the fibreglass lightweight trailer, it’s almost like a cult following right now,” said Thoen. “We are building the Trillium trailers and fixing old Bolers. Building these trailers has opened up a whole new avenue for our business.”

Email to a Friend